Minecraft’s waters are currently a bit lifeless: if you’re not building an underwater base or raiding an ocean monument then there’s little reason to dive below the surface. That will all change next Spring with the arrival of the Update Aquatic, which adds shipwrecks, dolphins, and coral reefs.

The update will split the oceans into biomes, the team said at the Minecon Earth conference, with different type of fish, coral and kelp depending on the temperature of the water. You’ll be able to catch fish in a bucket and move them around, so you can build giant aquariums in your base.

The new structures, including shipwrecks and icebergs, will hide treasure, and dolphins will leap from the sea and guide you to that treasure, which is nice of them.

Tridents are the thing I’m most excited about: they’re weapons that you can use for both melee and ranged attacks. Throwing them will spear your target but it means you’ll lose the weapon forever, unless you enchant the trident so that it comes back to you like a boomerang. Once you’ve got that enchantment you’ll have a weapon that you can use in virtually any situation. You’ll also be able to enchant the weapon to let you dash short distances in water or in the rain.

Bubble columns will liven up underwater locales, while new physics rules will ensure water interacts properly with slabs and fence posts. It’s all in the video above: skip to 9:00 to see the new items, mobs and structures in action.

The development team also announced the results of a fan vote on what mob they should add to the game next, and the winner is a flying stingray that attacks you if you haven’t slept in days (it’s the top-right one below). 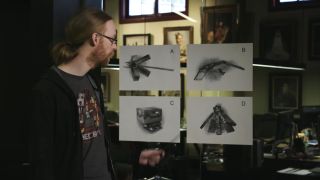 The enemy, which doesn’t have a name yet, spawns in high altitudes and is attracted to insomnia, so if you haven’t had some shut-eye for a while a group will swoop down and try to eat your flesh. Nasty.

Some bad news on the 4K Super Duper Graphics pack for the game: it was meant to come out this year but you’ll now have to wait until 2018 to make Minecraft prettier (or just download one of the many fan-made shader packs).